can you drink flavoured coffee on keto

Changing your diet to restrict or even eliminate certain foods is very challenging, and the ketogenic diet is no exception. This popular diet limits carbohydrates, usually 20 grams per day after subtracting grams of fiber, and it is recommended that you to eat the majority of your calories from fat. Terrified about giving up bread and pasta? It’s understandable, but one problem you won’t have to worry about is caffeine withdrawal.

Since your body needs to be conditioned to burn fat instead of carbs for energy — a state called ketosis that can lead to weight loss — this diet restricts many fruits, some vegetables, and pretty much anything delicious in the grocery store because they have too many carbs. However, you can still start your day with a cup of Joe, and there are a number of ways to enjoy it.

If you’re the type to just wants a jolt in the morning, then coffee without any additions is the way to go and will still be keto-friendly. With nothing else but coffee grounds and hot water, a simple 8-ounce cup comes in at less than 5 calories — and no fat.

That’s right, it works well within the mix of calories prescribed for the keto diet: 70 percent from fat, 25 percent from protein, and 5 percent from carbohydrates. Of course, you still need to hydrate with regular water no matter what kind of diet you may be following because caffeine — even iced coffee — can be dehydrating.

However, black coffee doesn’t have to be boring. Whether you prefer a regular drip maker, the sophistication of a French press, an Italian Bialetti-style brew, a single Keurig cup, or just an order from your local coffee shop, flavored coffee makes drinking it black more enjoyable. Hazelnut, vanilla, and caramel are the popular choices, but you can also search out coffee shops for your favorite flavor. To keep it keto-friendly, you should make sure that you’re using sugar-free syrups because the sugary varieties have way too many carbohydrates to be keto-compliant.

Another option is to add spices to your black coffee like cinnamon, cardamom, or pumpkin; it’s up to you.

Another plus of the keto diet when it concerns coffee is that you can still get your sugar fix whether it’s bright and early or to get you through a midday slump at work. Many have put either honey or sugar in their coffee – with favorable results. 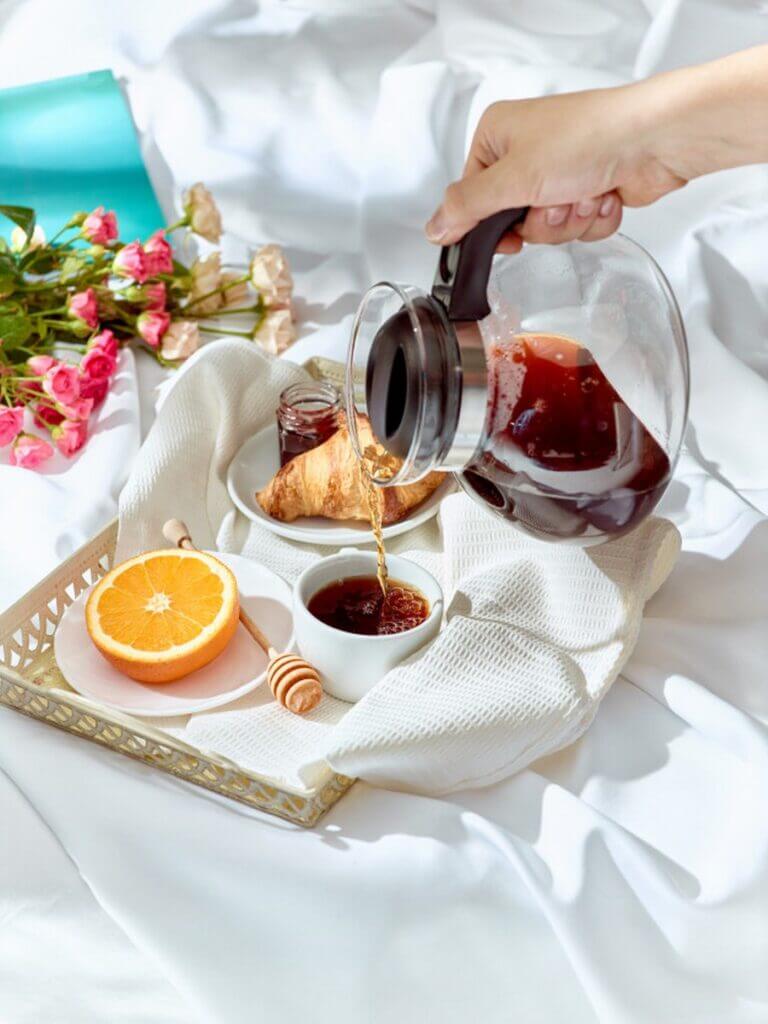 Neither of these will have the same taste as regular sugar, so you’ll have to do some taste-testing to figure out which you prefer.

Some people just don’t enjoy black coffee and prefer to have cream added. The good news about keto is that fat is encouraged, which means you can still put cream in your coffee — within reason.

Half and half is a great option at 0.7 grams of carbs per tablespoon, but you should make sure to calculate the number of carbs into your daily intake. You should also be mindful if you’re getting your coffee at a cafe from a barista — it’s likely that a lot more half and half is added, so you should request to add it yourself.

Heavy cream is another great option for those on the keto diet because much of the carbs is replaced by milk fat. However, not everyone loves the taste of heavy cream.

Almond, cashew, coconut, and soy milks are also fantastic options for the keto diet. Again, make sure to measure your amounts and look at nutrition labels for carbs and added sugars.

That’s right, you read that correctly. On the keto diet, putting butter on toast isn’t a possibility (bread is restricted due to carbs). Instead, you can put it in your coffee for a fat-loaded way to start the day or to get you through the afternoon. This kind of fat without carbs works well on keto, too. The more economical version of keto-style coffee is to simply add some grass-fed butter to your cup. It’s also the way people have been drinking coffee in Ethiopia and tea in Nepal for centuries.

But if you want a modern version of it that has a cool-sounding name, you should consider trying “bulletproof coffee,” which is a mix of butter and MCT oil — a flavorless, odorless oil that mimics coconut oil in its properties and fat content.

It can be tough making the transition from a regular diet fueled by almost 50 percent carbs or more to one that’s focused on healthy fats from nuts, olives, avocados, coconut oils, cheese, butter, or ghee and other healthy fats. Some people have reported getting the “keto flu” as the body adjusts to a new source of energy, but at least you can keep some part of your routine and still enjoy your coffee.

Is Flavoured Coffee Bad For You

How to add flavor to coffee

Can Coffee Reduce weight? Caffeine alone won’t help you slim down. It may slightly boost weigh…